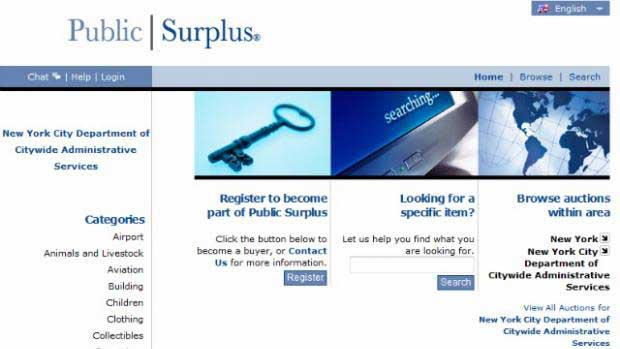 CITY HALL - Have you ever wanted your very own used parking meter? How about a barge-mounted steam crane?


If so, you're in luck, because the city is about to launch a new online eBay-style auction site to sell items it no longer needs, DNAinfo.com New York has learned.

The Department of Citywide Administrative Services has teamed up with publicsurplus.com, an online auction site, to create a portal that will list everything from office supplies to furniture and lab equipment.

There will be used computer items, such as printers and copiers, used machine shop equipment, including drills and saws, as well as more unique lots, such as used city parking meters, a Department of Sanitation Hopper Barge and a barge-mounted steam crane, department spokeswoman Julianne Cho said.

Officials said they hope the partnership, which will move sales online, will help boost revenue for the city as well as reduce waste.

"DCAS is committed to cutting costs, generating income and reducing waste," said DCAS Edna Wells Handy, who touted the partnership as "another example of how to achieve these goals in an efficient and cost effective manner."

While the site won't officially begin accepting bids on city items until August, other states already have numerous items listed categories ranging from "airport” and "animals and livestock” to children's toys, cafeteria tables and real estate.

The state also recently launched a similar online auction site through eBay that has featured a steady stream of unusual items.

Recent items up for bid include a lot of dorm room furniture from the Rochester Psychiatric Center, with 27 nightstands, nearly two dozen twin beds and a bunch of armoires, which were going for $46, with less than 24 hours to go.

Those who just can't get enough of the Dewey Decimal System can invest in a lot of 10 card catalog file cabinets, now priced at $490, with two days to go.

There's also 15 tons of scrap metal, containing guide rails, signs and other metal debris discarded by the State Department of Transportation, already up to $200 with nearly six days to go.

And for those with even deeper pockets: two 1,000-gallon milk tanks, courtesy of the Department of Corrections for $510.

The site managed to bring in $1,648,074 by selling 454 state vehicles in its first ten days of operation, Gov. Andrew Cuomo's office said.

The Public Group, LLC. All rights reserved © 1999 - 2022
Home Products TPG News About Us Contact Us Careers